Lucy Ware Webb Hayes was born on August 28, 1831, in Chillicothe, Ohio, and attended Wesleyan Female College in Cincinnati, where she met Rutherford B. “Rud” Hayes. They married in 1852 and lived in Cincinnati until the Civil War. The future President grew to share her deep opposition to slavery.

President Hayes and the first lady celebrated their silver wedding anniversary at the White House in 1877. The East Room was decorated in white flowers, with a great floral wedding ball beneath which the couple repeated their marriage vows. They exchanged portrait cameos as anniversary gifts to one another before a large crowd, many of whom had attended their original nuptials in Cincinnati.

Mrs. Hayes was a temperance advocate, and alcohol was banned at the White House during her husband’s administration. However, her famous nickname “Lemonade Lucy” was apparently only used after she left the White HFirst Spouse Gold Coins – In 2007, the United States Mint released the first four coins in a series of Gold First Spouse Coins. These Gold coins are the U.S. government’s first 1/2 oz .9999 fine Gold coins and are also the first U.S. Mint commemorative 1/2 oz Gold coins. With a face value of $10, these Gold coins are minted and released annually in the order the First Ladies served in the White House. Each First Spouse Gold Coin will be minted in Uncirculated and Proof conditions and will coincide with the release of the four annual Presidential $1 Coins.ouse. 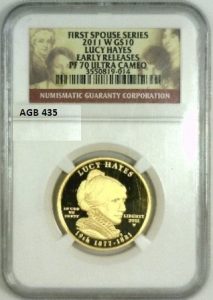